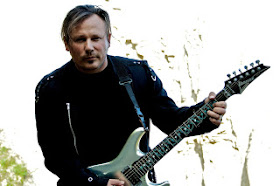 Maybe I'm dating myself with this particular column, but really how would it be possible for any self respecting metalhead who loves shredding guitars not be a fan of hair metal if they're being totally honest with themselves?

Well, Pyramids On Mars is going to be honest with us.

Before that though, BANDCAMP!

Who was your first Hair Metal band?

I was 7 years old. I sure do remember Quiet Riot when their first album Metal Health came out!

All us boys were into metal only and they brought their LP vinyl albums to school! I would say the very first Hair Metal band I was introduced to was W.A.S.P. Then Quiet Riot.

Ozzy (Diary of a Madman and Blizzard of Oz just came out) and of course DIO The awesome Rock T’s back then with the white sleeves and black shirt.

Whitesnake. Back when Steve Vai was their guitarist of course!

I also like Cinderella, Mostly because they looked so cool.

3. To me, there's no Hair Metal track better than Unskinny Bop. This is science. That song is so lovably terrible that it shakes your butt for you, but what's your favorite?

4. What's the most cringe-worthy interview/video/moment from back in the day?

Not so cringe-worthy, but I used to have a KISS VHS video of them back at their mansion, during the Hair Metal days. Used to watch it regularly.

(Note KISS Exposed is more cringeworthy than the One Million Dollar Check scene in Decline of Western Civilization Part 2: The Metal Years.)

KISS: ALIVE!! (made a huge impression on me)

Nirvana: It was like once the video for Smells like Teen Spirit hit MTV, all the Hair Metal band videos were GONE.

And then it was Soundgarden (Jesus Christ Pose video). Everything changed after that.
Nicholarse B of S at 8:00 AM
Share