I find myself getting back into heavy metal. I had long sworn off the genre because to many bands were coming out like Korn and Meshuggah. I just really can't find myself enjoying the djent metal bands. On this blog I'm not going to separate the metal subgenres too much because I find that to be exhausting. Yes there are different kinds of metal and yes there will always be a new corner of the metal world, but I'm just don't have the time to pigeonhole things that extensively.

This brings me to the full length debut release by Adrenaline Mob. For some reason I had it in my head that this was their third album, but I was wrong. Upon listening to this album a few times, I am glad to find out that this was their debut release. I'm not going to say this is a flat out bad record, but this group shows its shortcomings a little more clearly than I would like over the course of the nearly fifty minutes of Omertà.

From time to time I am surprised by what I end up purchasing. "Blunderbuss" would definitely fall into that category. With the death of commercial radio, or would it be un-death as the continue to play the same things over and over and refusing to let them die, I am not exposed to new music anymore.

Because of this, I had never really heard anything by the White Stripes. I knew the song "Seven Nation Army," but that was about it.

I did kind of dig that song though. My big issue is that during my time of hating all things new, I had judged the White Stripes without ever having heard them.

Even now, I still haven't heard anything else by them, but I have redeemed myself somewhat by purchasing Jack White's new solo record, at least I feel that I have. Because of a complete lack of familiarity with the White Stripes and Jack White, I really had no idea what to expect when I put this album into the CD player.

This will be a slightly strange post, but  here we are. Over this past weekend, I saw both the Hooten Hallers of Columbia, MO and Butterfly Boucher of Nashville by way of Australia. I'm aware this is a bit of a strange mash up, but here are. There were many other bands between these two bills, but I'm only going to talk about the bands we were there to see.

On Friday night, I was a the Off Broadway club with some friends to take in another show by the soon to be legendary Hooten Hallers from the middle of my home state. I had heard of this group in early 2012, but for some reason, I did not really check very deeply into them. I suppose it could be their name. I suppose that even though intellectually I know that the vast majority of great band names are taken, sometimes I'm still a bit put off by what a group, or in this case a duo, chooses to call themselves. I saw them for the first time at El Lenador when they took an open spot on a bill opening up for Left Lane Cruiser and I was floored. I was very excited to see them again and headlining this go around.

Review: "The Story of Light" by Steve Vai

I love Steve Vai. My affection for him and his playing is not represented in my album collection as well as it should be, but I'm working on rectifying that. Mr. Vai and I go back a long ways. I still remember seeing him for the first time in the David Lee Roth videos. (This is the second recent album review of a former DLR guitar player. There most be something about Diamond Dave wanting to work with the best.) Do you remember that triple necked ambidextrous heart guitar?

In this day and age, Steve Vai is an elder statesman of instrumental guitar. In my playlists, Mr. Vai's music goes into to spots: metal and instrumental. Neither one of those categories accurately reflects what Steve Vai is. He is a stunning artist on the guitar. When I listen to his music, I simply get lost inside what he has created. In my mind's eye I see complex textures and landscapes when he is playing a melody line. Though he's often simply called a shredder, he's far more than that. Leonardo da Vinci was simply called a painter, but that was only one aspect of what he did as well. I could wax poetic about what Mr. Vai is and isn't for about three thousand words, so I suppose I should move on with this narrative and get to the CD. 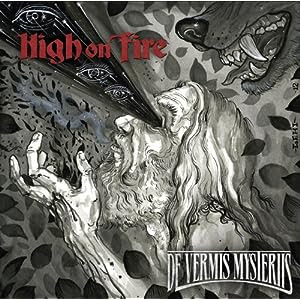 This is my first foray into what is called Stoner Thrash. I can remember when I was a little kid listening to what we termed heavy metal because that's what Steppenwolf called it, but now there are so many designations of what metal is and part of it is where it's from, but this really has nothing to do with this album, and I'm rambling about this, so I'll move on.

High On Fire is a power trio from Oakland. "De Vermis Mysteriis" is the sixth release by the trio and it's supposedly a high minded concept album about a very strange story.

The story line revolves around a character who's the twin brother of Jesus Christ who has to give his life force to the incubating messiah so that Jesus may live and redeem the world as foretold, but then after giving his life force to his in utero brother, he becomes a time traveler on the order of Sam Beckett from Quantum Leap. Confused yet? So was I, but I became very intrigued and I bought the CD.

Once I started playing guitar again, I rediscovered my love of a few things: death metal, instrumental guitar, and Guitar World. This John 5 album really touches on all of those things.

He plays bone crunching metal, all of his solo records are instrumental, and I read about this album in Guitar World.

John 5 is more than just a virtuoso guitar player. He is one of the most important players of our time, but almost no one has heard of him. His two most prominent gigs are as a sideman for Rob Zombie (current) and Marilyn Manson (past).

He has also recorded two albums with David Lee Roth under his given name John Lowery. He's recorded an album with Rob Halford and more. I know this makes him sound like he's a metal guitarist and nothing more, but he's also recorded for KD Lang, and many others. As a young player, his goal was to be a session player California. Well he's achieved that and more.

Album Review: "All That I Was" by Tremonti

I'm still trying to figure out why I have purchased this album, let alone listened to it. Let me get some things off of my chest before I get to Mark Tremonti's latest project, "All I Was."

I hate Creed and I think Alter Bridge is very average, but that's really a big step in the right direction in my mind. Now, let's go back about twelve years...

In 2000, VH1 released their Creed episode of the wildly popular show, Behind the Music. I watched every episode of the show, so I did see the Creed episode. There were two things about it that really got on my nerves. The first being that VH1 treated the band Creed as thought it was Scott Stapp's solo project instead of a band. Mark Tremonti was the Ray Manzerek to Stapp's Jim Morrison, in that he wrote the vast majority of the music, and Stapp wrote the lyrics and in the Behind the Music, Tremonti had about 45 seconds of face time. The second being that Stapp's parents had more face time than the rest of the band combined. Ok, let's flash back forward to 2012.

Email ThisBlogThis!Share to TwitterShare to FacebookShare to Pinterest
Labels: All I Was, Alter Bridge, Bruce Kulick, Creed, Inuyasha, Tremonti

I have been a fan of both James Leg aka John Wesley Myers of the Black Diamond Heavies (except on their second album where he is credited as James Leg, I am just as confused as you.) and Left Lane Cruiser for little while now.

I discovered James aka John..etc at the Schlafly Tap Room when they were opening up for Excene Cervanka and the Original Sinners. Even though they were a fairly heavy band without a guitar player, I ignored that slight against nature and bought their album.

Left Lane Cruiser I discovered via Amazon's recommendations. When I saw that James had guested on a significant portion of their latest album, I was sure that I needed to purchase it. I was correct! Those tracks gave me an inkling of what could be.

Left Lane Cruiser, like the Black Diamond Heavies, is a duo, but instead of a piano and drums, they're a guitarist and drummer. Those three tunes though, they were magical to me. They were big and full and full of mojo. I thought that if James would quit the 'Heavies and join Left Lane Cruiser full time, I'd be happy...