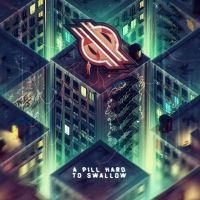 It's always fun to learn about bands from other parts of the world that we don't always associate with heavy music. Quasarborn is from Serbia. It only makes sense that there's a heavy music scene over there.

It's ever so common for Metalcore bands to say that they're undefinable and that they straddle so many worlds, but this isn't metalcore. It's like that. This is somewhere between whatever sort of metal Ozzy Osbourne was and death metal.

The guitars give me a sort of Zakk Wylde vibe actually, but Zakk from Ozzy, not from Black Label Society. (Don't get me going.) They have that sort of progressive bent where the riffs change up frequently, but it's never overly taxing.

Their usage of dynamic changes from the vocals to the guitars make ear fatigue something you don't even have to think about.

All in all good songwriting, great playing, and some impassioned vocals make for a fun, if not revolutionary listen.

Email ThisBlogThis!Share to TwitterShare to FacebookShare to Pinterest
Labels: Goatblood, Goats of Doom, Into Pandemonium, Qusarborn 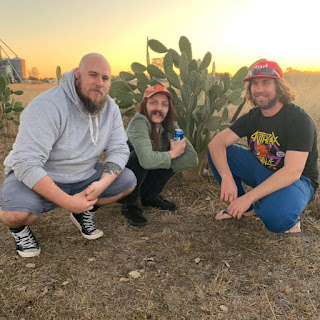 We're bring the Fumarole back! That means all their superfluous U's are coming' with them.

Check them out on BANDCAMP.

1. Everybody loves Taco Tuesday, but what's the best time to eat tacos for you and how many tacos do you put back in a standard sitting.

Gotta love that end of the work week taco binge, grab a couple beers which quickly turn into tequila slushies and bad decisions, ah I can taste the next day regret already!

There’s no counting when it comes to a taco binge. I usually measure it by phases, Phase 1 - Still hungry.

Phase 2- ‘the sweats’ this is where any reasonable human thinks about slowing down but not me.

Phase 4 - ‘are my sides actually splitting?’ I used to think this was just a saying but I swear there’s been a few times I could feel this starting to happen.

Are You Ready To Rock with Elegant Devils

Dear Ottawa, I'm sorry about your Senators. Not the current ones, but the original team that moved to St. Louis, became the Eagles, and promptly folded.

In the meantime, check out your home town rockers, Elegant Devils. You can learn all about them and sample their wares HERE.

Anything with Ian Thornley gives me tingly feelings. Man that guy can SING. Underground album - a band called Inward Eye played a show in Ottawa opening for Finger 11 when I was a younger lad.

They had a demo that I bought off them after their set. Didn’t have a name but I listened to it non-stop for MONTHS.
Read more »
Posted by Nicholarse B of S at 8:00 AM No comments:

Email ThisBlogThis!Share to TwitterShare to FacebookShare to Pinterest
Labels: Are You Ready To Rock, Elegant Devils

Pizza Pie Do or Die with Atomic Kavemen

Atomic Kavemen are riding high after the release of their latest EP, Everybody Loves A Dead Man. They're digging it so much, they talk about it during pizza time.

It must be good.

Find out on BANDCAMP.

1. Pizza is the world's most perfect food. This is not up for debate. Please define pizza as based on your geographical location.

San Francisco doesn't really have its own variation, but we do have decent representation from other locales. We have gourmet deep dish with cornmeal crust.

Email ThisBlogThis!Share to TwitterShare to FacebookShare to Pinterest
Labels: Atomic Kavemen, Pizza Pie Do or Die

Formerly of a guitarist of A Forest of Stars, Duncan Evans has slipped into the solo world.

Check out his tracks over on BANDCAMP.

But for now, let's check his classic spins.

DE: I am all for concept albums and I agree that Pink Floyd have done them particularly well. Dark Side of the Moon strikes the right balance for me, where there is a genuine "concept" which ties all the songs together, but it doesn't try too hard to tell a narrative story.

The Wall is of course a classic, but I also very highly rate The Final Cut which is perhaps even more cutting and clear with its anti-war message.
Read more »
Posted by Nicholarse B of S at 8:00 AM No comments:

Are You Ready To Rock? with Waingro

Who loves Vancouver? When I was in Mexico last week, I spent about 3 hours at dinner with a whole table of people from British Columbia. They were super nice.

Check out some Doom Stoney Grunge stuff from that great province....here's a BANDCAMP for ya!

Generally, I really can't stand live albums, but there are a few that have snuck by and ended up in the ol Spotify rotation.

KISS Alive! is probably the one I've gone back to the most consistently - we'll address the controversy of that whole situation in a couple of questions.
Read more »
Posted by Nicholarse B of S at 8:00 AM No comments:

Email ThisBlogThis!Share to TwitterShare to FacebookShare to Pinterest
Labels: Are You Ready To Rock, Waingro

Pizza Pie Do or Die with MVRVA

Who's up for some stoner sludge doom metal?

They're on the BANDCAMP and you can stream it to your heart's content.

While you're doing that, pop some tums and talk pizza.

1. Pizza is the world's most perfect food. This is not up for debate.

Please define pizza as based on your geographical location.

Pizza in South Carolina is different interpretations of pizza.

This is not a bad thing because you get to try everything and each one is a little different. I think the best pizza in Columbia is probably Labrasca’s Pizza.

Some of the coolest pizza as far as region is in Atlanta. They have a lot of rock n roll joint type places that serve good pie.

Email ThisBlogThis!Share to TwitterShare to FacebookShare to Pinterest
Labels: MNRVA, Pizza Pie Do or Die

Talking today to The Bloody Hell. If you're not following them on FACEBOOK, now would be the time.

You can also get your streaming on if you wanna....BANDCAMP.

But in the meantime, let's talk about the most extreme of the metals...

Previously known as Cirrosis, they're back with their sophomore release and only twenty years after the debut.

Go stream that stuff on SPOTIFY.

My favorite kind of album is the concept album. The Wall is my absolute favorite. Beyond the amazing songs, it has spectacular nostalgia for me.

What's your favorite one and why?

The Crimson Idol from W.A.S.P. The story of a black sheep, a metalhead seen in the family as a bad guy or a loser.

The story of many people, not a fiction, is a deep and real story. Musically a master piece.

My very first album was Live Evil by Black Sabbath. Since then I've had a strong affinity for the live record, even if they're a bit fake. KISS set the bar with Alive!.

Surely, it was fake, but it's got the best concert feel of any one. Tell me about your favorite live record?