"Walking Through Hell" by Hidden Intent 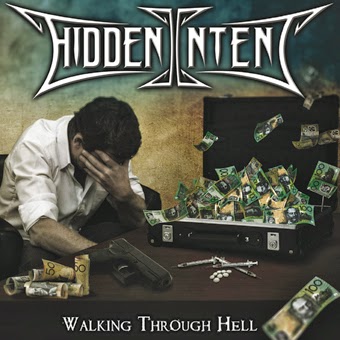 Until very recently, I was rather unaware of the thrash metal movement going on in the Australian continent and islands.

It would appear that thrash metal was placed on a boat circa 1992 and finally copies of Kill'Em All have been circulated to every single guitar store in Sydney, Melbourne, and New Zealand.

It's very clear that this very powerful power trio has an equally powerful sense of humor as that's how the credited themselves, but the little vignettes and the final track, Bass Wankage, kind of seal it up. These days in the music biz, if you don't have a sense of humor, what do you have?

On April 23rd, Master played at the Fubar on Locust Street in St. Louis.

This is a band that has been around from the beginning of death metal. The band originally formed in 1983 and since then, Paul Speckmann and cohorts have been blasting out their brand of death metal, which has aged very, very well.

Walking into the Fubar, I found Speckmann sitting at the far end of the bar drinking a Budweiser. I realize now I should have asked him about Budvar Beer. He was wearing a Master hoodie. His long hair and beard both greying now.

He's speaks with a slight tinge of the dialect often heard in Eastern Europeans now and is quite funny. Throughout our conversation and the night I often laughed.

What I found most striking about Paul Speckmann wasn't his hair, his out and out metalness, his Explorer styled bass, his musicality, but his drive. He is driven because he loves what he does.

As he and I discussed Master has released 12 studio albums. I can name three other death bands that have such a catalog: Cannibal Corpse (12), Napalm Death (15), and Deicide (11). Strong company indeed. 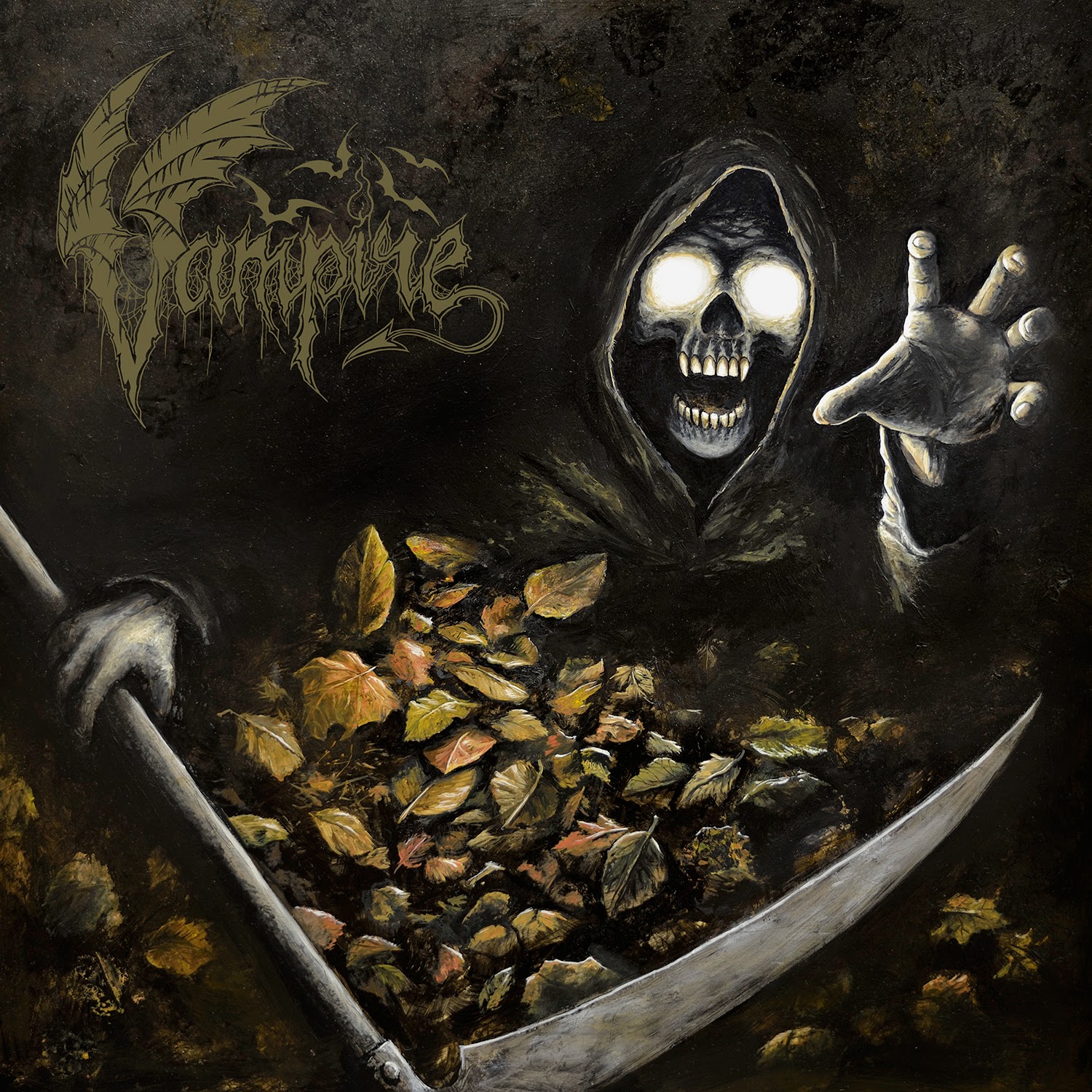 Here's a band from Sweden. It's a bit hard to believe that death metal records still come out of Sweden, but here we are.

Like Ghost, Kiss, and others, Vampire's identities remain a secret and horror is a very big theme in their writing. Mystique as a thing that can never hurt a metal band.

Remember, there was nothing worse than seeing Ozzy Osbourne taking out his garbage after the mystique was gone.

This album was a recorded in a fully analog studio between September and October of 2013. The place is owned by pop musicians and rarely do they ever work with metal bands. Due to their recording in an old fashioned studio, the music has a warm feel to it that modern day equipment just cannot touch.

"Another Scheme of the Wicked" by Invertia 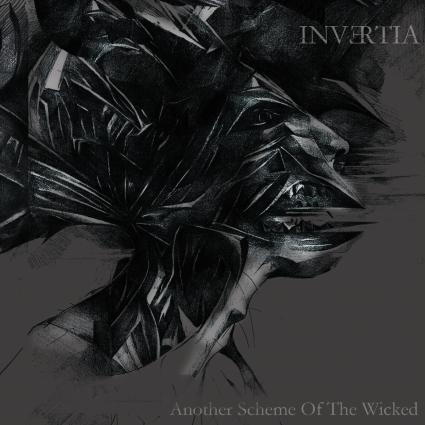 Up for our consideration today is an album by Invertia, who are described as industrialized black metallers. Typically, when hearing a description like this, I begin to wonder about the band, because that's awfully specific.

The pair in question, Dave Coppola (guitars and vocals) and Tim Winson (drummer and programming), are from New England. This is a first.

Seriously, how many black metal bands can you name from  New England? I'd think that all the lobster and picturesque vistas would keep someone from growing so angry.

It was with a slight bit of trepidation that I approached this album. More often than not, programmed drums and the like tend to lead to albums with blast beats that are so heavy, so fast, and so brutal that the average human being can not hear all of the thuds.... 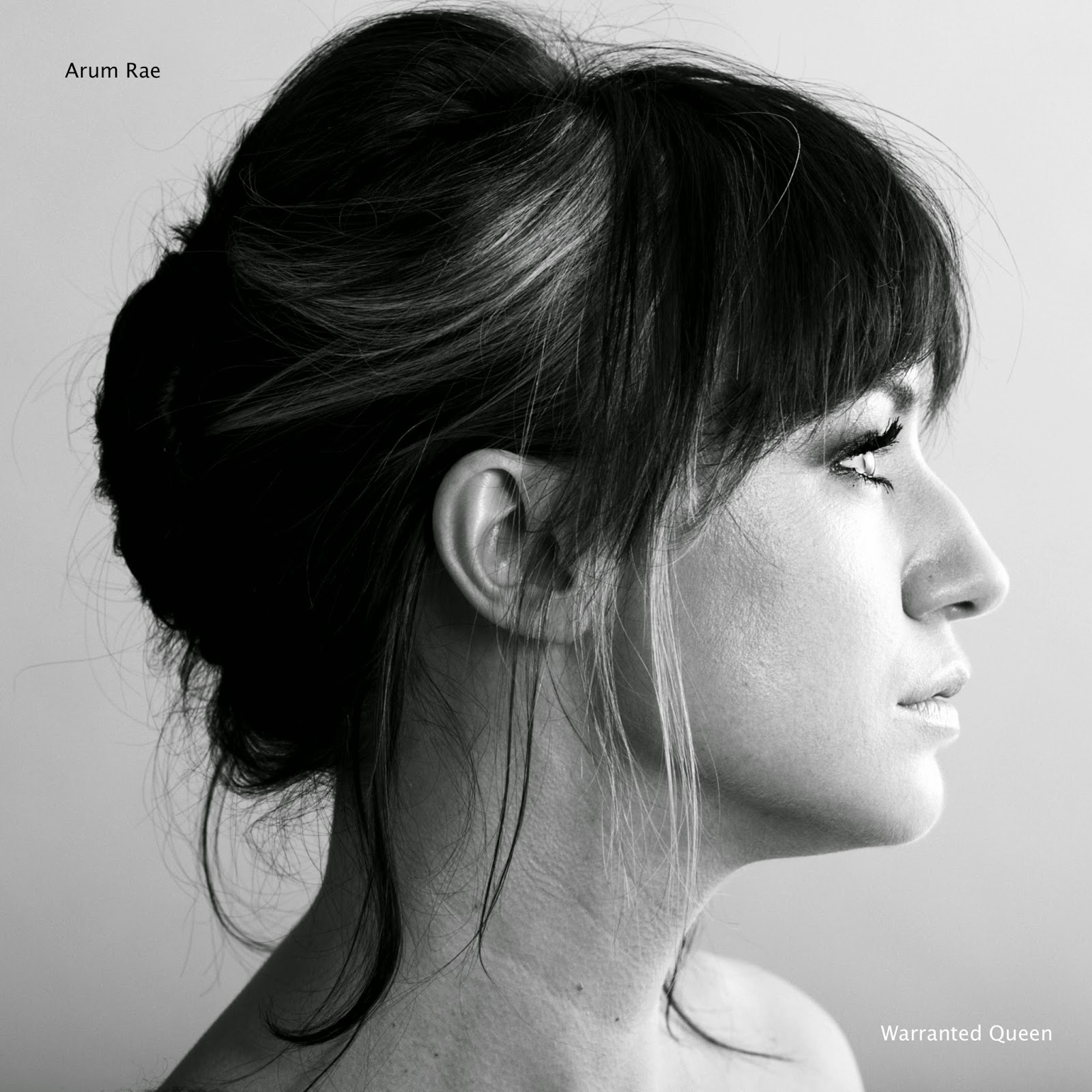 Arum Rae (formerly known as White Dress) a singer from Brooklyn, NYC, via Austin, via Boston, and more. Nothing in her story is simple.

Born in New York City, relocated to Austin, and received a scholarship to the Berklee College of Music. This where she learned to play guitar. This is where she learned the inverse of the lesson that so many guitar players learn, you must play and sing in order to never rely on others, but she sang first, instead of the inverse.

She has toured extensively with some very major players including Willie Nelson and B.B. King.

It's a good thing she changed from white dress, because frankly that's a pretty common term for the google and finding information on her in that stage of her career is darned near impossible!

"Beautiful and Treacherous" by Dinner Music For The Gods 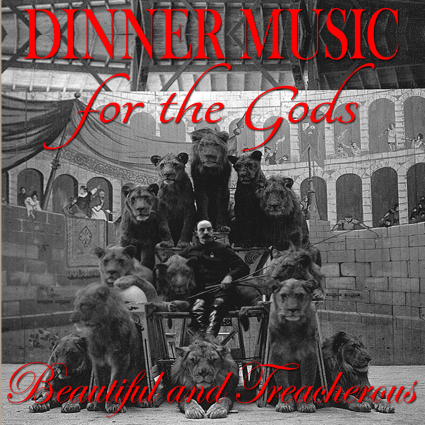 For our perusal today we have a cd of instrumental guitar music. Some of my favorite guitarists have forewent vocals on their albums, John 5, Steve Vai, Joe Satriani, and more.

Who are these people?

Beyond their names, the fact that a pair of brothers with the surname Pappa handle the lead guitar and bass guitar...well there's nothing else to explain about who they are, where they are from and all that jazz.

Speaking of jazz though, this album, like most instrumental guitar records, is not precisely metal. It's not precisely rock. They call it a fusion of just about every genre of music that can be named, and then toss in a few that don't even have guitars in them....and you'd be getting close.

Email ThisBlogThis!Share to TwitterShare to FacebookShare to Pinterest
Labels: Dinner Music For The Gods, DIY, Metal 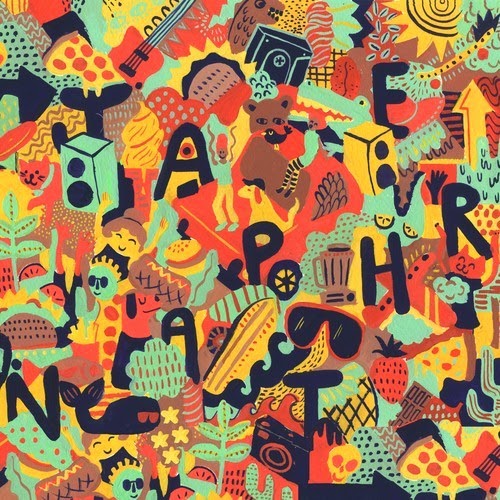 Japanther has been around in some form or another since 2001. Formed by Ian Vanek and Matt Reilly in New York City, they have been taking their act on the road for some time.

Over the course of the years, collaborations with a great number of artists have come and gone and they have been involved with some interesting things, like the "Don't Trust Anyone Over Thirty" puppet rock opera.

I'm sure just hearing those words interested you. I know good and well I'm upset that I only just heard about it, so I missed it.

On the stage is where they have made their reputation. Tales of their shows are legend. On top of a bridge. With a cadre of synchronized swimmers. With puppets. With giant puppets. With shadow puppets. The list of the things they have put on stage with them goes on.

"Hic Abundant Leones" by The Tower 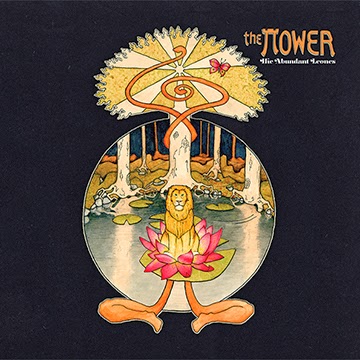 Every now and again, bands have a back story that creates wonder. Guitar Wolf is a Japanese punk band who were raised by wolves.

Gwar (RIP ODERUS!) is (was?) a group of aliens bent on human destruction. Kiss...well who knows really what they were.

The Tower though, I think has all of those beat. I can say nothing better than what they have, so I'll just quote them for you:

"It was back in 1938 that the brothers Erik and August and their friend Viktor migrated south. They left the small village in the northern forests where they grew up for the big city and the university, to study the science of harvesting the earth. On the fields beside the burial mounds in old Uppsala they met Tommie, a Soviet refugee. He showed them his sole possession, a blues vinyl from 5300 BC, suspecting that it would fit their melancholy northern souls. The four sat down in a barn and played a blues jam which lasted until 1945, when the war ended and the post-apocalyptic nuclear winter began…"

There is honestly a whole lot more....but let's just get to the music. 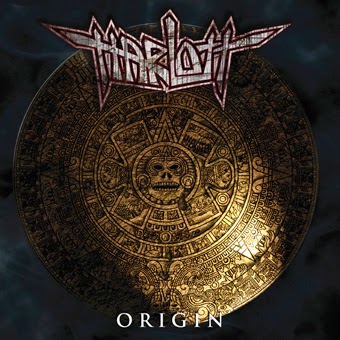 If you close your eyes and picture 1983, you're going to be in the right mindset for this old school thrash record.

Harlott, the band, hails from Suburban Melbourne, Australia, which has a growing metal scene. That's heartening to see. Bring the metal to all corners of the world.

Harlott's reputation is held up by their high energy shows, up tempo music, and they're very strong devotion to The Bay Area Thrash Metal Scene of the 1980's.

Remember when Metallica's only record was Kill 'Em All? Well Harlott does not, but this doesn't stop them for carrying the torch into well into the new millennium. 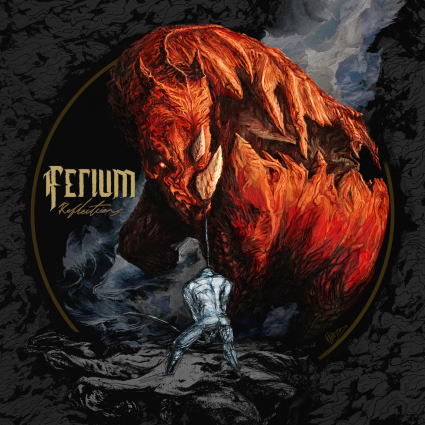 For today's consideration, we have the latest album by an Israeli band, Ferium.

Ferium was formed in Hafia, Israel in 2006. "Reflections" is their full length debut LP. They did release an EP in 2009, and a demo of this record in 2013, but this is their first full length ablum.

For me, it's always very important to put into context what a band is, where they have come from and whom I think they are.

For Ferium, it's not as simple as all that. For many bands, they are death metal, or English metal, or stoner metal, or blues, or delta blues, or like others, they weave in and out of many styles in order to achieve what the song can achieve.

This is the best way to describe Ferium.

"Free My Animal" by NØMADS 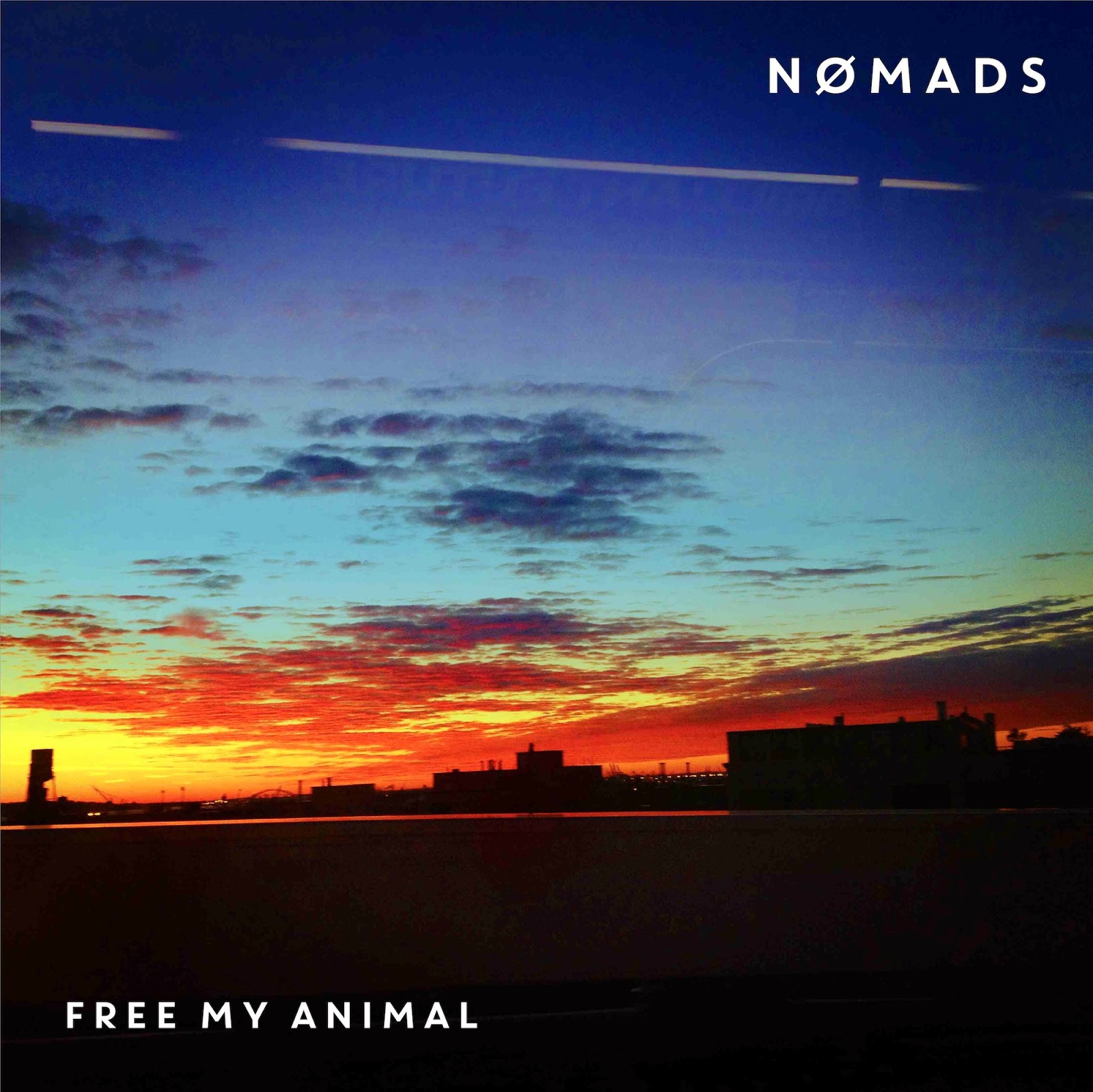 NØMADS are a noise rock duo featuring Nathan Lithgow and Garth Macaleavey, both of whom are  familiar names in modern rock circles.

This venture though, I would wager that nothing they've done previously really compares to this music. (If this is wrong, please let me know because this is the internet after all.) Referring to this duo as a noise rock group though seems so, well ill fitting, but that'll be explained in a bit.

Most of the duos, that are so in vogue these days, thank you Black Keys and White Stripes, consist of a guitarist/vocalist and drummer. Then other little bits are added here and there for color.

Granted there's the James Leg/Black Diamond Heavies thing where the singer is holding a piano, but he overdrives it so much, off track. Off track. Here is where the NØMADS live up to their name by veering off the well worn path. Instead of an electric guitar playing the music, it's an electric bass. Cliff Burton fans rejoice, this album is for you. 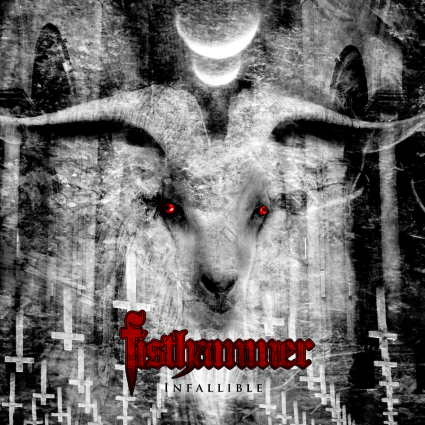 Here is another death record from Philadelphia. You may recall my raving about Coffin Dust. It would appear that a scene is developing.

These bands are both full on brutal death metal, but they sound distinctly different from the standard Tampa Bay style death metal that has been so prevalent in the USA and beyond over the years.

Philly's own Fisthammer has been at this as a band since 2008. Their first record, "Devour All You See," was released in 2012 and for our perusal today, we have their sophomore effort.

They have been on tour with bands like Master and Sacrificial Slaughter. Perhaps this has helped them mature far more quickly than had they been left to their own devices.

"Back From Beyond" by Massacre 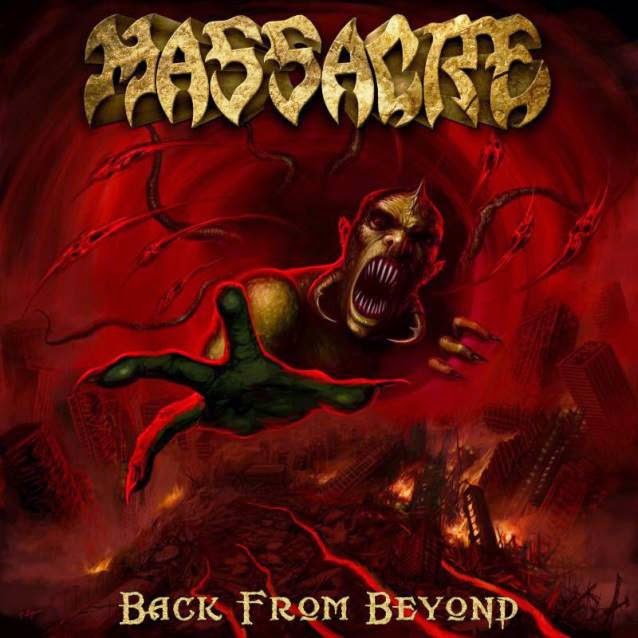 First and foremost, I am a music fan and that's why I do this. Sometimes, I'll see the buzz about a record and think, I really need to hear that album. Well, that's how I was feeling about Massacre's first full length LP since 1996.

This band has a very interesting and unique history. The members here have cross pollinated with Death, Obituary, etc. They even did an EP with Cronus of Venom.

That's even cooler than Volbeat doing a song with King Diamond, but they did do a tour with Fate guitarist, Hank Shermann.

Massacre has a very Tampa Bay Death sound and one of the most interesting histories of break ups, reunions, and more. At this point, Massacre has two original members all of the original fury.