"In The Minds of Evil" by Deicide 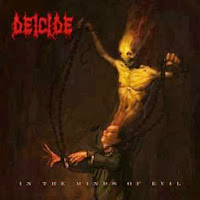 Glen Benton!  Deicide has been around a very, very long time. In just a single year from now, the boys will be eligible for entry to the Rock'n'Roll Hall of Fame and honestly if any death metal bands deserve it, they do.

Deicide got their start in the Tampa Bay Death Metal scene with other extreme acts like Cannibal Corpse, Morbid Angel, and Obituary. The evil ones in Deicide have never stopped. It's staggering to think about just how long this band has been at it. Twenty five years and still playing clubs.

For me, it's very easy to respect the death metal bands. They know they're not going to get rich in music. They know that they won't be able to even do music full time. Lots of these guys have jobs on the side, but heavy music is their passion and for some, Glen Benton and his cohorts, it's a method of getting their message out. As usual, we'll be glossing over the lyrical content, because I don't care.

"Entrails of the Soul" by Aetherium Mors

It's the fact that it cannot be killed.

This music never dies. It continues to lumber along, alive, undead, or something different. Napalm Death, Morbid Angel, Carcass, Deicide, and more and more bands have been slogging it out for decades in some cases, and returning to the game in others.

None of those bands are household names. Not a single one of those bands will ever be rich off of the music they play. Morbid Angel was recently in St. Louis on the 20th Anniversary tour of their seminal album, "Covenant," playing in a club.These musicians are road dogs and gluttons for punishment. When a death metaller tells you that it's about the music, you know it's true.

In Defense of "Lulu" by Lou Reed and Metallica

It was announced recently that Metallica will be performing at the Grammy's with Chinese pianist, Lang Lang.Quickly, this the heavy metal websites I read all in a tizzy. Then the expected maelstrom of anti-Lulu crap started flowing. I'm just sick of all of this "Lulu" sucks stuff. Metalsucks.net has been leading charge for a long, long time. It's January, 2014, and that's all I can stand and I can't stands no more!

Over the nearly three years or so since it has been released, I have seen significant amounts of hate for this record. There are significant reasons why people didn't like it. It was different. It was vulgar. It was, for lack of a better word, profane. Metallica didn't write all the songs. James didn't really sing.

Please lend me your time as I go over why you got it wrong if you think Lulu sucks. I've listened to this double record countless times. COUNTLESS times. Did you spin it more than once? Be honest. Did you?

The other day, this guy was just sitting at his desk minding his own business when my iPhone buzzes to let me know that an email has arrived. Its contents held an invitation to check out "Occult Delight" by a band that was unfamiliar to me.

Sounds good to me!

So, who are these guys?

Upon hearing them for the first time, the most common reaction would have to be are they British? Well, British Columbian....(Is that a thing?). This group hails from the far west of Canada, Vancouver, BC.

This is a new wave band through and through, but being just a small boy, who was into heavy metal, when new wave was new, all new wavey things still sound kind of new to me. Only recently did I discover that I kind of like the Psychedelic Furs...

"The Astronaut" by Wax Fang 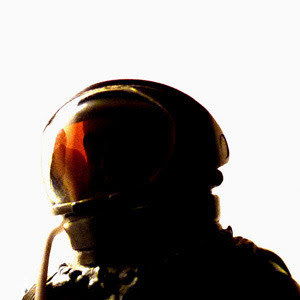 How many bands can you name that hail from Louisville, KY? Aside from half of the Black Diamond Heavies, for me, it's none. However, for your consideration, we have a band from Louisville, KY. When I think of Louisville, there are two things that come to mind: The now defunct-ish Louisville Redbirds and Big Red Soda on the fountain. (Hey, it's my blog.)

The music scene isn't what comes to mind for me, but honestly, the music scene in most smaller cities, like my own, don't really spring to mind. Obviously that's not fair.

Every city can't have several vibrant music scenes like Los Angeles and New York, but I refuse to have City envy. I love my big small city or small big city...however you want to look at. This band was brought to my attention by their management. They sent me an email to see if I'd check out their latest project, "The Astronaut." Here we are so I think you can tell that my answer was yes. 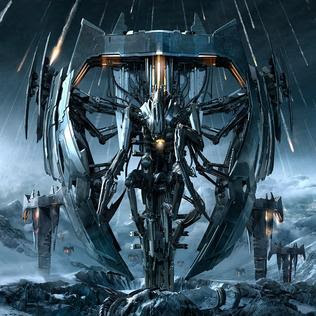 Here is an unknown band right? This is their sixth release and even though there are two others of theirs in my library, this would be the first close listening of Trivium by me.

Do you ever look back at how a band caught your attention? Matt Heafy put Trivium on my radar because he and Epiphone released a series of his Les Paul Customs. It's very cool when an artist chooses to release a signature guitar on Epiphone or LTD and actually plays them.

Being a Les Paul "player" myself, his devotion to my instrument of choice piqued my interest. After listening to this record, my first thought is what are you guys trying to do? I hear so much of your influences all over your sleeves, but it comes out sounding spectacularly unique.

"Halo of Blood" by Children of Bodom

All the death metal, that's what we're trying to get to here. This is the latest release by Finnish Death Metallers, Children of Bodom. Why is it that so many of these death metal guys come from Scandinavia and sing in English?

At least I assume it's English. The titles are in English.

These happy fellows have been recording and touring for going on two decades, so by now they should have all of this figured out right? This quintet is interesting to me as they have a keyboard player. This is probably a more and more common occurrence these days, but it's just not familiar to me. Metal website fave, Alexi Laiho, sings and plays guitar here as well.

Huntress, the King Diamond Inspired, pagan metal band from just last year is back with their sophomore record. It is gratifying to see that they are hard at work. Between the last time they graced these pages, they have played St. Louis twice and have released Starbound Beast.

That's very good. There have been a couple other bands whose sophomore effort we're all still waiting for.... You may recall that Huntress is a band that I believe could turn into something great. They have the right ingredients. Their first album was an interesting debut. It certainly had its strengths and weaknesses. The title cut was spectacular in particular. We were all introduced to Ms. Jill Janus, the lead vocalist. She  has a range similar to that of King Diamond, though she can go higher and he can go lower, but she also has the growls and the howls to go along with the shrieks and operatic runs. She is a very talented woman.

"Hail To The King" by Avenged Sevenfold

Avenged Sevenfold is not really all that familiar to this guy. Back in the Columbia House days one of their first records was a selection of the month for me, but after seeing their name and listening to a track, it was canceled.

Flash forward a number of years and they release a song called "Nightmare." That one was a damned fine track and it at least got me a bit interested in them.

Not uncommon for me, their being profiled in Guitar World sparked a serious of events that caused their latest record, their sixth, to end up into my music library...so now here it is for you to enjoy as well.

Seriously, six albums for these guys. I still remember when they were a brand new band. Now apparently the entire world's heard of them and can probably name more of their songs than me.