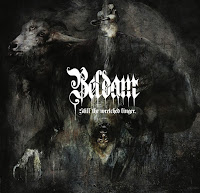 There are many great metal albums which would serve as the perfect soundtrack for a horror movie. Beldam’s album “Still The Wretched Linger” is the horror movie itself.

This is sludge metal at its finest, with plodding, ominous low end riffs lurching into your ears and dragging the listener into the murky depths of a haunted swamp.

Stanley Stepanic’s vocals can be described as an operatic spoken word growl, which remind me of the vocal style of Attila Csihar, the legendary vocalist of Mayhem fame.  The lyrics, where they can be discerned, are about torture, evil and despair.

My first listen to the album turned a sunny Sunday afternoon into a journey into the black abyss, the absolute juxtaposition of the outside world gurgling forth from my speakers like molten lava from a volcano.  "Still the Wretched Linger" is a heavy, intense journey to the dark side, and like any good horror movie, is best appreciated at night. Subsequent spins were all done after sunset.


Beldam is a middle English word meaning old hag or witch.It is a good name because if a witch were to call forth demons from the netherworld and equip them with guitars upon their arrival, I imagine the band they would form would sound something like this.

Alas, the band is not really composed of demons, but rather are four musicians from Charlottesville, Virgina.
In addition to the above mentioned vocalist, the band features former Hank Williams III touring guitarist Grahm Reynolds, Comparitive Anatomy bassist Addison Dodds, and newcomer Cullen Wade who was chosen from an exhaustive audition of the finest drummers Virginia has to offer. ﻿ ﻿

These progenitors of sludge are to be commended for delivering an uncompromising album which never strays from the dark path. Excepting the intro riff to "Beauty's Martyr" which has a stoner metal sound reminiscent of The Sword, every song maintains the pace, power and inexorable march of a movie monster villain stalking its prey.

The passages are slow and thick, with a muddy fuzz which could only gurgle forth from the underworld, earning the label of sludge metal, that sub-genre of doom metal, which is even more doomy than the doomiest doom.  Should anyone ever ask me to explain sludge metal I would direct them to “Still The Wretched Linger” as a defining album.