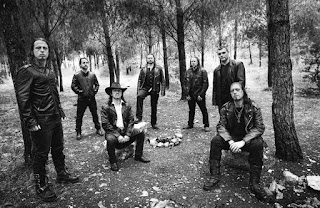 On May 3, 2016, Glacially Musical reviewed the new Winterhorde album "Maestro", which is an absolute masterpiece of symphonic black metal.  It was a privelege to be able to follow up the review with an interview of Winterhorde's bassist, composer and lyricist Sascha Latman.

Danny Nichols of Glacially Musical: I think the Israeli metal scene is much more extensive and has produced so many more great metal bands than many American metal fans realize.

How has forming in Israel contributed to the sound of Winterhorde?

Sasha Latman of Winterhorde:  Hello Danny! Actually forming in Israel didn’t contribute that much to our sound, because most of us are immigrants from post-Soviet republics.

We carry our culture and musical influences from the areas of our origins. Be it Ukraine or Belarus, the Soviet musical roots are still deep within us.

We had always a different sounding from the other  Israeli metal bands. Moreover, we were inspired mostly by European metal scene, which is recognized with its melodic approach.


GM: What are some of the bands you would consider to have been an influence on Winterhorde, which seems to draw from so many sources, yet still sound so unique?

WH:The range of our influences is very wide. From metal side I could easily pick Emperor, King Diamond and early Cradle of Filth.

From the progressive side, the best examples would be Pink Floyd and King Crimson, while everything is mixed with a huge dose of soundtracks from Soviet movies from our childhood. I guess every type of music which has good melody and done great could have some influence on us.

GM: How difficult is it gaining an audience for extreme metal in Israel? 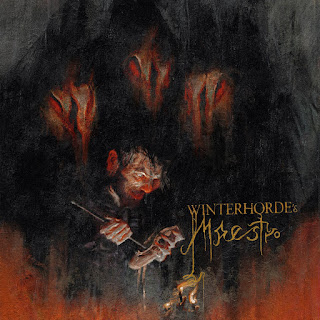 WH: Extreme metal is the most popular genre of metal in Israel. So forming an extreme metal band in 2001 was quite a normal thing to do.

There was an audience for every kind of extreme metal genre. Today, unfortunately it’s little bit in decline, the youngsters prefer more groovy stuff and more older people go back to the roots.

So today is quite difficult to gain an audience for our type of music. However, I think it’s not only in Israel. It’s worldwide thing.

GM: How was Winterhorde first formed?

WH: Haha, quite a typical beginning with an ad in metal forum.

First, we were only two soul mates and within 2 years of searching, we had the whole line-up complete, total of 6 musicians. Then came the first gigs, the first and the only one demo record, and then a record deal, followed by an European tour.

Nothing special so to say. But we worked very hard to get everything. Still working hard on everything.

GM: Can you tell me about the musical backgrounds of the band members?

WH: I finished the musical school in Belarus, I played saxophone. Alex learned to play piano in musical school as well. I guess everyone in the band studied music more or less.

Honestly I don’t even know the exact musical backgrounds of everyone now in the band. We’re all into good metal – the music which united us in the end. But it’s not so strange now that classical music or jazz penetrate our metal barriers from time to time.

GM: The songs on “Maestro” are truly epic, intricate,complex and multi-layered. Tell me about the songwriting process for the new
album?

WH: Due to the big distances between us, we can’t write music in the rehearsal room anymore, as we used to do in our early years.

Today, the composer brings about 70% of the future song, we discuss it via mails, everybody gets some ideas. Then we come to the rehearsal place where we finish and polish it, unless we’re 200% satisfied with the result.

In most cases there are more than only one composer in the song. But everybody contributes to it’s final shape and color.

GM: How did these compositions come into being?

WH: We don’t know by ourselves how they come to life. We’re trying to satisfy our own musical tastes, which is very difficult task of it’s own.

We can decide on the biggest parts in five minutes, but argue about the details for days or even months. But we never give up on doing the best music we can. We believe that music stays with us  forever, so it’s better to be bloody good.

We’re not into rush of releasing a lot of albums, but if we one, it has to be something special.

GM: “Maestro” seems to me to be a concept album, which deals with the topic of insanity. What led the band to tackle this subject in
particular?

WH: Since I wrote the stories for the albums until now, so it comes from my personal observations and experiences.

I wrote the story of “Maestro” during my work with mentally ill people, when I was a student. Their stories with full descriptions sometimes left me speechless.

Those people are living side by side with us, but every one of them is living in their own world, and mostly full of pain and fear. This subject is very interesting, but very shocking at the same time if you go into details.

GM: How fully was the album planned out conceptually, before formation of the songs began?

WH: The story was written completely, when we only started demoing the first song from the album. I can’t say that the story itself affected the formation of the songs, but it helped a lot in the stage of final arrangements, especially in the vocal work.

GM: Tell me about the recording/mixing/mastering process for “Maestro”?

WH: Almost everything on this album was recorded by our keyboardist Alex Feldman. He did fantastic job there. We recorded during weekends, and because of such kind of schedule, it took us much longer than we planned.

For mixing duties, we turned to V.Santura once again, who did an amazing work on our previous album. He also came from Germany to help us with recording of rhythm guitars. Moreover, he was a co-producer of the record.

The mixing session was made mostly by e-mails and when the mix was ready, we sent it to Jens Bogren for mastering. Totally, we worked on the recording from April 2015 until December 2015. But I think it was worth all this time.

GM: How difficult was it tracking seven musicians?

WH: To be true, we tracked about 14 musicians, haha. But when the people know what they want and know what they do, it becomes just a pleasure. We wanted this album to be larger than life and I think we succeeded doing this.

Every one performed its part just great and everything just fell into the place. It took a lot of time though, but the chemistry within the band was perfect during the recordings. The guests we had on the album were getting those vibes as well and gave us their 200%.

We felt that we were doing something very big and this feeling just gave us more power to continue.

GM: Has this daunting process become relatively smooth for you at this stage in your career?

WH: I think it was the best moment of our career as a band so far. We have a lot of great memories doing this album. We have grown as composers and musicians during these sessions. No internal tensions, no bad blood.

Everything just went great. We had a lot of hopes for this record. Probably the composing of this album was actually the most terrible period for the band on all the levels. But in the end the problems were solved and we could work with a great feeling of relief.

We just enjoyed every second of it.

GM: What was it like working with the legendary Jiri Valter (aka Big Boss) from Root, who provided some guest vocals on the album ?

WH: First of all it was a huge honor for us to have Jiri as our special guest. He provided narrations during the album. No singing this time.

It was very easy for us to communicate, as Jiri had to be himself on this record and he did an outstanding work. The album wouldn’t be the same without his intervention. I sent him the lyrics and he came up with those voices in many variations. The first takes were great enough to have them on the record.

He’s very kind and supporting man.I hope one day we will do more music together, maybe with vocals this time.

WH: All of us are big Shining fans and especially the fans of blues oriented guitar playing by Peter. His solos are amazing.

He has very beautiful touch and we really wanted to have him on the record. We felt that it was the right to do it, but didn’t really believe that this co-operation can actually happen.

For our biggest surprise, Peter kindly agreed to do this solo and left us speechless with the result.

WH: This girls is really amazing. Her name is Noa Gruman from Israeli progressive metal band Scardust. I think that very soon she will be a huge star.


GM: What does the future hold for Winterhorde?  Tell us about tour plans in place to support the album?

WH: Well, no one really knows. We don’t have any plans yet.

Our management is trying to put us on tour, but nothing is confirmed yet. We hope to have some touring before the next year and from the beginning of 2017 we would like to start working on the next album.

Living in Israel doesn’t give you too much of touring options, so we just have to wait for the magic to happen.I hope it happes soon.  We have some local shows for the album promotions, it will happen in autumn.

Regarding international touring, as I said, we have nothing planned yet. Our management is trying to fix something though. We’re optimistic about it somehow.

GM: Does Winterhorde have any plans in place bring their metal to North America?

WH: It would be awesome to make it to North America. Maybe one day we will be a big band and finally meet all our friends there. It would be fantastic experience, really.

GM: I really enjoy your band and am honored to have the opportunity to interview you. Best of luck and keep the horns high!

WH: Thank you very much, Danny.  I really hope we can come to States and play for our American friends, and we have many there.


To stream or purchase Winterhorde's album:

Posted by Danny Nichols at 3:00 PM