Vinyl Review: "I Want This To End" by The Erkonauts 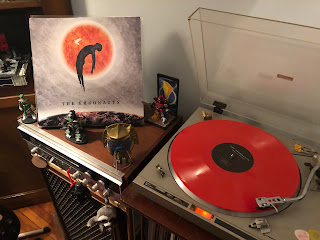 Can we all take a moment to really consider what a shitshow 2020 has been? When something goes right, three other things go wrong.

Honk if you've had your Prius's catalytic converter stolen this year and take a shot if it's happened to you twice. I'm in the latter.

Light a candle for those who've lost more than two.

So, for the last review of the year, I'm lucky enough to get to do a vinyl review of this amazing band's latest record. You might recall my previous reviews of The Erkonauts...they're an odd sort of band that's a bit influenced by bands like Faith No More and Infectious Grooves.

Let's dive into side one.

If you're looking to hear that bass guitar fly, don't worry, because track one is going to give you some thunderous bass guitars the likes of which I've never heard, not even that time I took a cruise on Sarsippius's Ark.

But our Swiss friends are more than just a Flea based metal band, there's some exceptional lead guitar work.

There's certainly no question that this is music that's got a base on the bass. PUN GAME!

But that doesn't make it bass heavy if this makes any sense at all. The Erkonauts are definitely the sort of act that causes one to describe them in contradictory terms, but they're all true simultaneously.

The guitars make for a delectable counterpoint to the bass. But then there's the vocals...and <checks notes> oh, the bass player also sings.

That tracks does it not?

An overly musical approach might offset the balance. It's sort of like death metal, except totally mellow.

Now, let's move on to side two.

Well damn. Let's get heavy and funky. There's not really a word for that, but we need one. I'm not really in the mood to coin a term, so hit me up in the comments.

But whatever that word is..that's what this is. Then we have a strong heavy groove to start this song off right.

It's rare that a vocalist just thumps out with the guitar and the vocals at the same time, but damn you Ales Campanelli, you did it.

Side two is the more contemplative of the two, but slow and sludgy. Then at times they break forth with all of the furor of Motley Crue after mainline Jack Daniels and cocaine.

It's hard to make real heads or tails of this band, but that's the real fun here. They're an odd bunch making difficult music.

I think it's safe to say that same sentence could have been written of Pink Floyd and many other amazing bands.

The vinyl packaging itself is, apart from the red/orange splatter, pretty no frills. No insert, no gatefold, and no lyric sheet.

But this record arrived to me in St. Louis, MO from Geneva, Switzerland with nary a seam split or any warping of any kind on this record.

It sounds great without any semblance of sibilance. Deep and varied. This album sounds delicious coming out of my speakers.

Get this. Trust me on this one if you've never trusted me before.

Email ThisBlogThis!Share to TwitterShare to FacebookShare to Pinterest
Labels: The Erkonauts, Vinyl