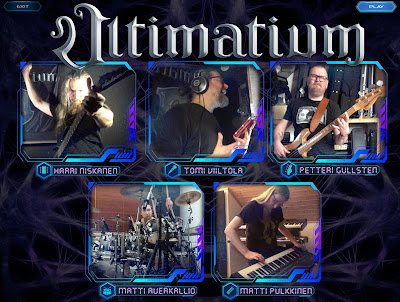 Having a chance to learn about the music the metal guys are into is one of the best things in the world. Today, we're talking to the keyboardist of Finnish prog quintet Ultimatium, Matty Pulkkinen.

The perspective from those in other countries is always something I look forward to.

Their album is dropping on November 27th via Rockshots Records. Get a taste of the flavor on their YOUTUBE channel.

Now, let's talk about those records.

Easy answer would be: Any Ayreon album.

But the longer answer is: Seventh Wonder-Mercy falls. That album still gives me goosebumps when I listen to it. It has such a dramatic story and the songs are quite unique

2. My very first album was Live Evil by Black Sabbath. Since then I've had a strong affinity for the live record, even if they're a bit fake. KISS set the bar with Alive!. Surely, it was fake, but it's got the best concert feel of any one.

Tell me about your favorite live record?

I think it’s Stratovarius’s Visions of Europe. (The) band was at the best at that time and it just has that live mood and sound

4. One of my friends laughs at me, routinely, for loving the Misfit Toys of albums by major bands. Lulu by Metallica and Lou Reed, Carnival of Souls by Kiss, Diabolous En Musica by Slayer, etc.

What's the strange one that you love?

On the music side, I don’t think I like such albums that are considered “strange ones,"at least not among my friends.

5. It's almost fashionable to release live versions of albums or re-record the old ones. King Diamond is releasing a concert with Abigail front to back. Roger Waters has done The Wall twice.

Which ones do you have in your collection?

I think live versions of the album, like played from the first track to the last are cool, like Operation: LIVECrime.

But I do not like re-recorded albums that much. When a certain album has been made, there’s no way you can go back to that same -20years musician and perform it in the same way.

I personally try to look forwards, why do the same thing over and over again?