Album Review: "The Afterman: Ascension" by Coheed and Cambria

Have you ever heard of an album and then really hoped you would be able to enjoy the music it contained within? This is what happened to me when I heard about "The Afterman: Ascension."

I had never heard of Coheed and Cambria and honestly if I had, I may have very well dismissed them on their name alone, but I read the article I received in my email about their new concept record: "The Afterman."

As someone who grew up wearing out Pink Floyd "The Wall," I was interested in the double album that was forthcoming from the band.

I even watched the trailer, though it didn't really contain any music to speak of. This may also be the first trailer I've ever watched for an album. Upon reading the article, I was disappointed to learn that the double album was a series of two single albums, but my interest was still piqued. 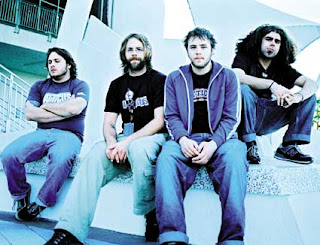 This album starts off with an esoteric instrumental, called "The Hollow," featuring computerated voices setting the stage for what's to come. After this song sets the mood to creepy, the band chugs into the first of the Key Entity Extraction cuts and this album is off and running.

For lack of a better term, I'm calling this a metal album. I've listened to it at least four or five times since it arrived to me in the mail and each time, I find it more and more enjoyable.

I have to say, this album is something I listen to cranked up very loudly. It just seems to sound better that way.

This is the second album I have purchased by Coheed and Cambria. I had read about The Afterman in August I believe, and I wanted to get to know them a little bit better before joining them on their new serial journey. I grabbed the newest album of theirs at the time, Year of the Black Rainbow, and while it was enjoyable, it is nothing compared to The Afterman.

As the album weaves its way in and out of the Key Entities with harmonies, style, grace, and metal it will grow and grow on you. At least that's what it did for me. In many ways I find this album to be very hard to describe, but it compels me to continue searching for the answers that it holds just out of reach. There are few metal albums I can describe as artistic, but this is one of them. Long story short, pun intended, pick up this album and see if you can figure out what I cannot.

Email ThisBlogThis!Share to TwitterShare to FacebookShare to Pinterest
Labels: Coheed and Cambria, Metal, The Afterman: Ascension