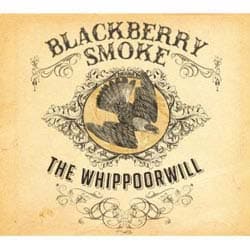 My wife and I were driving, and she told me about some southern rock band she'd heard about on NPR's "All Songs Considered" and that our daughter was rocking along like it was the be all end all of music. So, as I'm trying to make her a music aficianado, I bought her this CD, but I've kept it in my car for the most part.

The band refers to themselves as an apolitical southern rock band, but I don't really recall much politics out of Lynyrd Skynyrd. I know they worked for George McGovern's 1972 campaign and they made reference to the Watergate Scandal, but that's about all I can recall. As for the modern Skynyrd, well, honestly I don't pay that much attention to them, so they could be saying all sorts of things.

Well, on to Blackberry Smoke's record. This album opens up with a lively rocker called "Six Ways Till Sunday," and it doesn't take much imagination to guess what he's talking about, even before hearing the song.

This album is many things. It's fun, funny, rocking, sentimental, and unabashedly southern. Listening to just the music and vocal melodies, I can close my eyes and it is very near to a country band instead of a southern rock group. Their sound kind of reminds me of when I was younger and would hear country cover bands playing "Gimme Three Steps." With the way they played it, I didn't know it was a rock tune.

Apart from the great rock numbers, there are a few ballads that really shine on this disc. The second track is one of those ballads and it has a much different feel from the first song. Instead of it being a rock'n'roll song, in the classic sense of the term, the second track, "Pretty Little Lie," is full of emotion and the joy of a lost love returning. There are also some nice touches in the lyrics in this song ("there's a box of wine in the fridge") and in "One Horse Town" ("All they got is a worn out name") In the former, the box of wine shows that they're just regular people and certainly nothing fancy, but in the latter, the worn out name is a reference to Southern Aristocracy of the post-reconstruction era. That is the lyric that really stuck out to me on this whole album and I think it really shows a clear picture of the kind of people they are.

I have to say that I have really enjoyed this album and it is a great introduction to the Blackberry Smoke. I know they have two other records, but this was my formal introduction to the quartet from Atlanta. If you are a fan of Southern rock, this is a great album to pick up. This is an oft forgotten genre of music that does not get a whole lot of new blood and it would be a shame to refuse this transfusion.