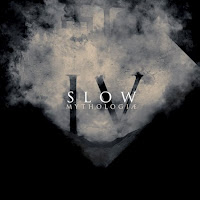 It's been about a year since Slow came into my life. Their record, V: Oceans was an absolute game changer for me.

It's now time to check in on their followup, IV: Mythologiae. Wait. What?

So, this album was originally released in very small quantities a couple of years back, but due to a hard drive crash, most likely caused by gremlins or the use of Apple iProducts, it was lost.

So, this isn't a re-release of that record, but wholly re-recorded version of that album. IV gives us the gift of Slow's evolution in reverse.

IV is mellower. It has a calmness to it that it's successor doesn't have. It wouldn't be wrong to say that V is the payoff of IV. After IV ends, the anger has built and it manifests itself along the edges. This makes me wonder, what will VI be like?

Slow will never win any awards for originality. Their albums aren't genre bending tours de force that'll leave you wondering what you just heard. They are examples of atmospsheric doom metal perfected.

This is a band that's true to their name and they take it SLOOOOOOOW.