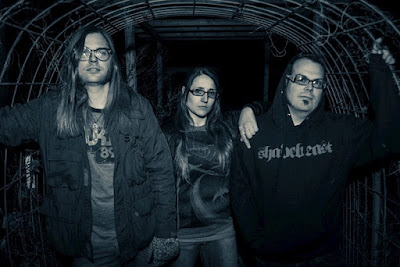 Normally, I wouldn't do this, but I think the press release bio sums up Ghost:Hello better than I ever could:

Ghost:Hello is a synth-loving stoner rock family affair from northeast Ohio.  Made up of a husband/wife duo and their cousin, the band members have been playing for decades.

With extensive individual histories touring around the US and in Europe in other DIY groups, this project just feels like a natural continuation.

Together as a family and as musicians, Ghost:Hello is now ready to take the rock n roll world by the horns.

Well, there you have it. In the mean time, they've got a record hitting the shelves this September.

You can preorder The Sound of Color in Space on their BANDCAMP page. In the meantime though, let's find out what kinds of albums they dig, mmkay?

1. My favorite kind of album is the concept album. The Wall is my absolute favorite. Beyond the amazing songs, it has spectacular nostalgia for me. What's your favorite one and why?
J. F.S. Sorrow by the pretty things. Well, it was technically the 1st rock opera concept album. So, for me it sets the standard. The story is great and it has a beautiful flow.

The performances kill. It was recorded in Abbey road in studio 3 so it has that magic in the production. Really, I just love laying back, zoning out and just letting it take me on a ride. Beautiful record!

2. My very first album was Live Evil b Black Sabbath. Since then I've had a strong affinity for the live record, even if they're a bit fake. KISS set the bar with Alive!. Surely, it was fake, but it's got the best concert feel of any one.

Tell me about your favorite live record?

J. Right now it's Nirvana "From the muddy banks of wishkah". Raw, not super fake. Energy out the ass on that performance.

4. One of my friends laughs at me, routinely, for loving the Misfit Toys of albums by major bands. Lulu by Metallica and Lou Reed, Carnival of Souls by Kiss, Diabolous En Musica by Slayer, etc.

What's the strange one that you love?


J. Probably Zeitgeist, by The Smashing Pumpkins. There’s just something about it, man.

5. It's almost fashionable to release live versions of albums or re-record the old ones. King Diamond is releasing a concert with Abigail front to back. Roger Waters has done The Wall twice.

Which ones do you have in your collection?
J. I don't, oddly enough. I mean I have plenty of live albums in my collection, but no full album reproductions that I’m consciously aware of.
Posted by Nicholarse B of S at 8:00 AM