Punk Rock? Well, it has never really been pleasing to me. Recently an explanation was given to me by a friend: Punk rock isn't exactly music, but it's almost an art form unto itself. What?

As someone who's always fancied himself a bit of a musician that has always admired virtuoso players, it is nearly impossible to swallow this concept. That's not the only issue. Beyond the lack of musicianship, and often musicality, there is a very serious lack of originality in the genre, at least in the group that gets famous outside of their punk rock peers. Seriously, how many guys with rooster mohawks have you seen doing Sid Vicious's trademark sneer? It has to be at least a dozen off the top of your head.

So Bad Religion? I didn't know they were still a going concern, but I do recall an interview I read in Guitar World that they did nearly twenty years ago. Crazy isn't it? It is now time to delve into their latest release "True North." 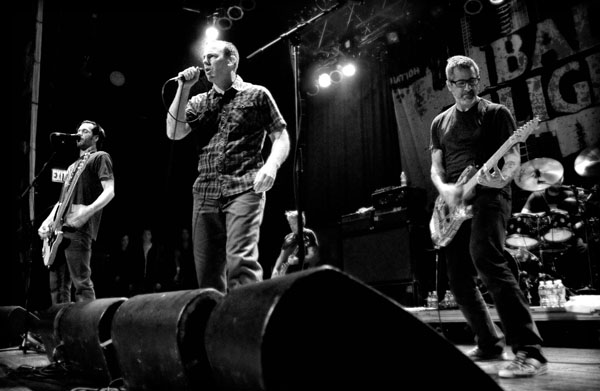 The album kicks off with the title track which is full of sound, fury, and anger. What's quickly apparent is the musicality of this track. The vocals are in key. The guitars are dripping with tone that would be the envy of anyone listening. The rhythm section is tight and in the pocket. The songs are even complimented by some lead guitar, though without any overindulgence (Read: They're short.).

The formula that is used in the opening track is repeated over the following fifteen songs. Though this album is a full on, balls to the wall explosion of anger, the songs never sound forced, derivative, or even all that similar. The former being a problem that is becoming more and more common with modern albums, much like the arrogant jedi in Episode II.

Though describing myself as a person who derives great pleasure from lyrics would hardly be apt, I really enjoyed the socially conscious and angry lyrics. If 'enjoy' is the right term anyway.

"Here is the church,
Here is the steeple,
Open the doors,
Corporations are people"

There has definitely been a lot to be angry about in the past four years and Bad Religion has definitely been angry and has waited as long as they could to scream it from the rooftops. This album should please rockers and punks alike. If this album doesn't get your blood pumping and your heart racing, you might be dead.