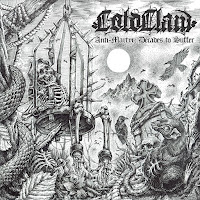 The band has just dropped a teaser for the video to their current single “The Deafening”, which you can see HERE.

To celebrate the release of the album, the band is hosting their record release party at their hometown venue, The Ritz in San Jose, CA, with support from other amazing bands such as Abstracter (Sentient Ruin) and Deathgrave (Tankcrimes) along with locals Slege and Cult Graves.

See poster and ticket link attached below.Area, ColdClaw is one of the hardest working, most prolific bands in the underground right now.

Following their fierce 2017 ColdClaw Demo, the band released the unforgiving and brutal Punish The Blind in 2018. With their raw, uncompromising sound enmeshing Blackened Crust with a hint of their Hardcore roots seamlessly, the band has whittled their sound and aesthetic down to their core elements on their new full-length Anti-Martyr: Decades to Suffer.

The sound of their dystopian vibe will earn them fans from those loyal to the soil for Goatwhore, Necrophobic, Naglfar, Hate, Wolvhammer, FukPig and more!

The band is releasing their new album on CD, limited edition cassettes and digitally at select DSPs at this link BANDCAMP.
Posted by Nicholarse B of S at 2:00 PM