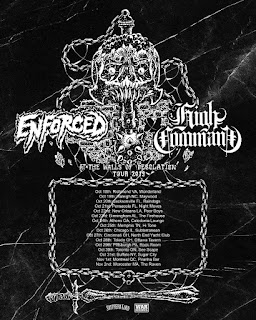 At The Walls features a remixed and remastered version of ENFORCED's2017 demo and their "Retaliation" promo, and introduces two brand new songs.

All tracks were recorded by Bob Quirk and mixed and mastered by Arthur Rizk (Power Trip, Cavalera Conspiracy, Candy), and the album's cover art was created by Dwid Hellion (Integrity, Psywarfare) who makes a guest appearance on the track "Skinned Alive."

Following their East Coast tour with Sacred Reich, Iron Reagan, and Leeway in May, ENFORCED has shared the stage with Accused AD, Red Death, Ekulu, and others on local one-off shows throughout the summer.

Now, the band announces their next widespread live excursion in support of At The Walls, this time with Massachusetts-based High Command.

Beginning October 18th in ENFORCED's hometown of Richmond, the At The Walls Of Desolation Tour 2019 will bulldoze northward through the Northeast US and into Canada before coming to a smoldering finale in High Command's hometown of Worcester on November 2nd.

At The Walls is out now through WAR Records on vinyl and digital formats through the label webshop HERE and Bandcamp HERE.

Fronted by a voice that could only belong to that of a madman and unloading nonstop blazing riffs and pummeling breakdowns in every track, the band demolishes everything in their path, leaving a trail of smoldering wreckage and pure decimation anywhere they perform.

Expect nothing but total war from ENFORCED; a must-hear for fans of Nuclear Assault, Demolition Hammer, Skeletal Remains, Foreseen, and War Hungry.
Posted by Nik Cameron at 2:00 PM