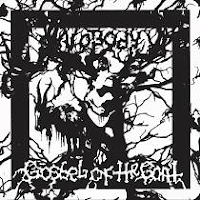 Well, as everyone else out there certainly is, I'm ready to hear more goat metal. 2020 is the year of the Goat on Glacially Musical.

This one isn't a goat based band, but an acoustic black metaller from Finland named Nobody. Who's in your band?

Totally works. This reviewer is superficially reminded of Twilight Fauna's more mellow works, but unlike the aforementioned Appalachians, Nobody is working solo. Not just by himself, but there's nothing other than the guitar. So, it's a black metal vocalist going on about goats over an acoustic guitar.

Frankly, this gets major credit points just for originality. The music is far more complex and features some tasty Latin flourishes along the way. It won't make any end of year lists, but it should be on your playlist. 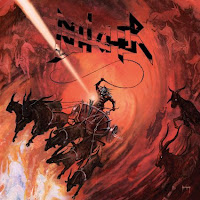 Looking back to the heady year of 1999 when my friend and I were creating an entire discography based on a goat...we never dreamed of 666 of them.

Pure. Royal. Satanic. Genius....and I'm all the way in on this. Imagine if Venom and Mercyful Fate had a baby that was then left to be raised as a feral child and then Iron Maiden showed up.

Are you a bit terrified or are you ready to party with the guys who brought the goats? Me? I'm ready to have a goat party with Germans. If you're into the riffs, they've got them for days. What about vocals that sound like they've been pushed through a blown speaker?

Oh yeah, they got you, boo. Personally, I'm the kind of guy who digs those overlong guitar solos and they've got me wrapped up too.

Reckless riffs played with the kind of abandon James Dean loved. It's an exuberant journey into the minds of a band that just wanna play it so fast and so brutal. 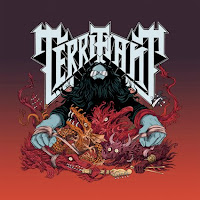 What happens when you listen to music that doesn't quite fit your tastes? Well that's what's going on here with Terrifiant. Their debut is the throwback of the NWOBHM variety. For some reason that music didn't hit my ears when it was a thing.

It has most of those lovely things all of us in the metal community seem to love. Pounding drums, great riffs, and guitar solos, you know it.

Where I personally have the disconnect is the extraordinarily high pitched singing. Maybe the extreme metal has just conditioned my ears to be a bit turned off by that style. It's a bit difficult to say.

If they were just a smidge grittier or a bit lower it would be ever so much more pleasing to my years. The songs are just fantastic and the Pat Benetar cover to close out the record was a great touch.

Being as the sub genre isn't one of my personal faves, it's difficult to comment on its originality and what not, but I love Gruesome, so whatever I guess right?

It rocks hard and even with my subjective tastes aside it's a fun listen.