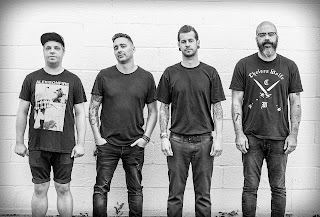 This year a group of British Columbianos released a new EP of tunes. Have you checkted out Dyatlove on Bandcamp?

It's been a few months, but the music is just as fresh as it was back in May. Enjoy some rock music from the North of the World.

In the meantime, let's learn more about their slice of that part of the world shall we?

1. St. Louis City is my hometown. I've lived here for most of my life in and around the city. Where are you from?

Originally I am from Los Angeles but I settled in Vancouver, BC, Canada as a kid. Dual citizen. Mother Canadian, father America. Best of both worlds.

2. We have three things that don't really exist anywhere else: the slinger, the gooey butter cake, and toasted ravioli. Tell me about your hometown delicacy.

I can’t really think of a singular dish that is really “Vancouver”...

Since we are such a multicultural city we have a ton of all sorts of good food. I’d say we are known for having some of the best sushi in North America.

3. In St. Louis, though there have been others. Our biggest hometown team is the St. Louis Cardinals (formerly the St. Louis Perfectos, nee: the St. Louis Browns, not the AL team that moved to Baltimore.) There is nowhere you can go to escape it. I'm a hockey fan, not a baseball fan, so it's a bit weird to me. Tell me about your hometown's big team.

Our biggest sports team is definitely the Vancouver Canucks. I’m not that big of a hockey fan but it takes the city over.

I’d say #2 would be the Vancouver White Caps FC.

4. St. Louis isn't really known for any one type of music scene. The biggest acts I can think of to get out of here alive were Gravity Kills, Nelly and the St. Lunatics, and Sheryl Crow. There's always been a vibrant concert scene though. What about where you are?

Vancouver is similar that way... As a teenager into punk rock and grunge, one of my favorite bands was SNFU. DOA is another one.

Other than that I’d say we are known for Michael Bublé?

5. 20 years ago, St. Louis had about 300 murders each year, floods, and all sorts of other fun things. You might have heard about us being named the Murder Capital of the USA. Nowadays, a lot here is 150. But there are lots of parts of the city that are returning to former glory.

On the whole, St. Louis is a better place to live today than before. Is there anything like that where you're from?

We have the DTES (DownTownEastSide) that can be a little shocking at first glance but there is a lot of good people there doing a lot of good things.

Vancouver is one of the best places in the world to live and when you’re from here you can see the good in all of it.

I live in a suburb south of the city but the rest of the band is still there representing.