Formats of Fun: Throne of Heresy 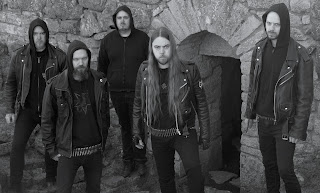 Throne of Heresy has just released their newest album, Decameron, via The Sign Records. It's a concept album about the Black Plague.

Sadly, it's not reviewed on these pages, but there's a coming interview about the record and it's on my Amazon Wishlist.

Check it out below!

1. The first album I ever owned was?

Apart from kids stuff I think it was a cassette of Europe's Final Countdown.

But the first vinyl I bought myself was Fear of the Dark when I was 12. It had just been released and I was stoked to get it.

Went with my parents to the local grocery store who, back then, had a vinyl department. I picked up the album, got home and was excited to put it on when I realized there was another album in the sleeve. Some shitty pop music!

Turns out that some unscrupuluous piece of shit had swapped the album out for one that was on sale for 10 crowns, which is roughly $1. So I had the sleeve but no album. It took a few days but eventually I got it sorted. But man, was I pissed.

Hardest question of all time. I think it's a tie between Piece of Mind and Powerslave.

It depends what mood I'm in. I really like ELP's Brain Salad Surgery with the pop-out cover made by H.R. Giger.

Mostly because it's weird and you go "whoa" when the cover opens up.

But is it the best? No, probably not.

I love the Iron Maiden covers but they're also kinda cheesy in their own way. Tempel had an amazing cover for The Moon Lit Our Path, gorgeous gatefold.

And I really love Behemoth's The Satanist as it was on the CD. The vinyl had different art for some reason, which is a shame.

And of course, our new album Decameron, has some amazing art by Mattias Frisk and Luciana Nedelea. So there's that.

4. My favorite heavy metal album of all time is...

5. My favorite album of all time (Any genre is)

Vinyl. That's where I started my own journey (except for a few cassettes with shit sound) and I just love the format.

Especially gatefolds with full cover art (not double vinyls though, I like to keep it to one disc).
Posted by Nik Cameron at 8:00 AM

Email ThisBlogThis!Share to TwitterShare to FacebookShare to Pinterest
Labels: Formats, Throne of Heresy