Vinyl Review: "Into the Kingdom of Graves" by Tyrants Blood

In one of the greatest movies of all time, Cary Elwes uttered this famous line:

"Life is pain, Highness. Anyone who says otherwise is selling something."

This allusion has come up in my introductions before, but in the United States are are looking at something we have never seen before.

What has happened before is the division, the strife, and the protests. The lines are clearly drawn. Where we go from there is anyone's guess.

What I remind myself everyday is that Jimi Hendrix wrote his arrangement of The Star Spangled Banner while Richard M. Nixon held the White House and in the backdrop of The Vietnam War. I have total faith that the artistic community will have loads of inspiration in the coming years. 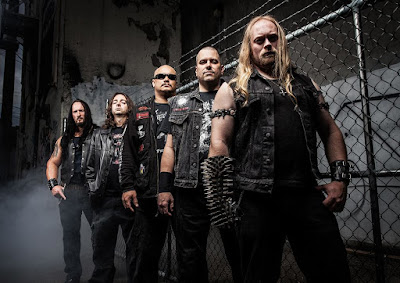 Today's vinyl up for review is the Special Edition of Tyrants Blood's Into the Kingdom of Graves released by Tridroid Records.

This album was originally released about three years ago independently by Tyrants Blood.

So, now it's getting a full label release and being treated to vinyl.

The sleeve itself is a standard sleeve with a black album.

There are actually two sleeves for the disc itself inside of the packaging, so I suppose, put them both on and stay safe everybody!

Every copy of the album will be sent with the disc inside the inner sleeve on top of the rest. (See the unboxing video below for more information.) Christine Kelly, Tridroid's Owner, explained to me that packaging it this way will ensure there are no seam splits upon arrival.

It has to be mentioned, yes, my copy of the record was immaculate. If it wasn't shipped to me direct from the factory, then there was some beautiful witchcraft afoot.

There's no less than 10 split seams in my personal collection that came straight out of the box, or the Hour of Penance record that an Amazon worker shoved into a box and bent the hell out of the corner which resulted in a refund.... However, the record was in perfect condition, so there's that and this isn't about them.

Into the Kingdom of Graves has cover art made for a 12" sleeve.

If you've been wondering why cover art isn't as good as it was in the 80's, it's because, aside from the hiatus into the CD, the canvas for the art has gotten progressively smaller.

Quick, take a second to hold up your iPhone to a 12" vinyl sleeve. Led Zeppelin III would be a perfect one for this.  Pull up the cover on your phone and hold it up to the vinyl.

Tyrants Blood have created a cover to similar effect here. Looking at this on my phone, the art would looked boring. With the space, the opening, and the room, this cover is absolutely beautiful and terrifying.

Ask yourself one thing, haven't you noticed that album covers have been getting cool again with the vinyl resurgence being stronger than ever?

Aside from the double bladed sleeves, the cool cover art, and the download code, there's still something else this record comes with, new photos and liner notes from the band's guitarist, Marco Banco which is definitely worth a read.

This album, like a lot of extreme metal discs, has a sweet spot in the volume to fully unlock the true potential of the sound quality, and that one's louder than most. So, don't expect to listen to this one at night if your stereo is next to someone trying to get to sleep.

Because that would be rude as hell, but once the sweet spot is achieved, this album sounds like melted butter out of my system.

As for the music itself, Banco described their influences and how they came to be so wonderfully in the notes, that there's not much I can add in order to sum it up.

Tyrants Blood is the combination of several genres of extreme metal, many different influential bands, and all pureed into an occult horror show. For the vast majority of the time, the songs are full on carnage.

It would be far easier to tell you what's not on this album. It's the kind of record that will take more than one listen to really get into those grooves. There's a lot going on and I'm willing to dig in and find everything, but that's going to take years.

In a time when we will have anger to work off, Into the Kingdom of Graves is a good starting point.