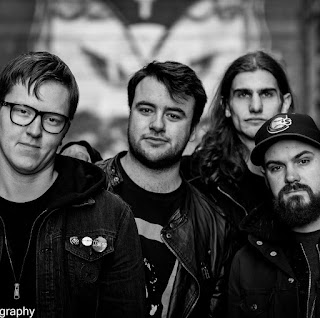 Welcome to the latest column on Glacially Musical: "A Man Walks Into A Bar."

The opening line to the most famous joke right? So, it seemed like a pretty apt way to start it out. Everything needs some sort of a  name doesn't it?

Hopefully no one will think this is some sort of comedy column though.

Now, due to there being a lot more non-drinkers that have been getting back to me on the columns, the column is worded so that the answers can be about any sort of bars.

Today, first iup is Derek Lionas of Getaway Van. This past February, they released their DEBUT RECORD!

Find out what they're all about while you read about how Lionas likes to tie one on.

1. Which is your favorite kind of bar and why? It can be any kind. Whiskey, Beer, Wine, Coffee, or Steel.

--- A dive bar that plays live music. We love a good time out with the crew, and you gotta support the local scene whenever you're able to.
Plus all the patrons and us have a ton in common that way!

2. When you get up to the 'tender, what's your normal order?

--- Beer. Usually a PBR or something cheap. Lately, if I see a sour beer on the menu, that's what I'm going after.

3. How did you find your local spot and what made you wanna keep coming back?

--- Our local spot is usually the Biltmore. We've all gone and seen many many shows there, along with being the ones playing them.

4. What is the craziest thing you've seen happen but didn't take part in there?

--- Oh man, it's just always a wild time. Fights? Topless chicks? Does it count if I saw it but I don't remember it?

5. Do they have musical acts there and have you played it?

--- Yeah they have lots of live music acts all nights of the week, and our most memorable time playing there was opening for Weaves when they came through town.

6. Is it harder to name a bar or a band? What would you name your bar?


--- I'd say the name Getaway Van came easily to name our band, so I would assume naming a bar would be harder.

If I opened a bar it would have to be called Moe's Tavern or Bar Simpson, for obvious reasons.
Posted by Nicholarse B of S at 8:00 AM

Email ThisBlogThis!Share to TwitterShare to FacebookShare to Pinterest
Labels: A Man Walks Into A Bar, Getaway Van Canada, Interview