St. Louis, Missouri has always had a unique place in music history, especially when it comes to the blues, beginning with the genre’s local pioneers and innovators of the 1920s, through a confluence of talent descending on the St. Louis area during the 1930s and 40s and culminating in the merging with and transition to rock-n-roll, best exemplified by the revolutionary styles of Chuck Berry and Ike and Tina Turner in the 1950s.

This fine tradition is not dead, and it is still proudly displayed by local acts such as De Los Muertos.  Although, geared further towards the rock end of the rhythm and blues genre, and containing elements which are more modern than what was available to the 1950s ear, the influence of the St. Louis blues rings true throughout their six song album “Altars & Offerings”.

This blues influence, mixed with elements of rock, alternative country, Americana and soul produces a unique sound the Gateway City can be proud to claim.

Although it may be somewhat of a disservice to the band, the temptation to compare new acts to ...
existing bands, as a means of giving the reader a sonic reference point remains. Although De Los Muertos may not specifically note either to have been an influence, there are moments during the album which can be described as sounding like Nirvana with Stevie Ray Vaughn on guitar, especially those tracks featuring Blake Schneider on vocals.

Schneider’s vocals are emotive with a raspy blues sensibility that toggles back and forth between despair, anger, and nostalgic melancholy.  And the solos are epic.  Dominic Puleo, must have spent a decade locked in a room mastering every scale invented, and then inventing a few of his own.  Behind every melody are Puleo’s skillful phrasings augmenting the vocal lines. The opening track “Girl In My Dreams” especially features a never ending string of licks, which flow effortlessly through the song.

Puleo’s vocal style is different from Schneider’s as it is more focused on extending notes in a soulful delivery, reminiscent of the great Albert King.  Enjoyable with both singers are the unique breaks and delivery of lines, invoking the story telling method of blues, while still hitting the rhymes in unexpected, but precise places.
While Puleo and Schneider deliver an edgy version of the blues, drummer Brian Keithly and bassist Sam Nicoloff bring the rock, creating a powerful rhythm section which carries the listener through the songs.  I especially appreciate the mix, as so many bands have a tendency to relegate the bass line to the background, but here Nicoloff’s playing is undeniable.   Keithly’s drumming is a great match for this band, as he perfectly paces them through each tune, placing each snare pop and cymbal crash to emphasize the mood of the song. 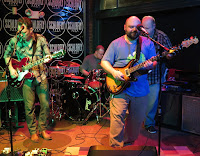 Typically my review plan is to highlight a favorite track which best represents the album.  Here it was difficult, because my favorite track changed with each listen.  The amazing solos and well crafted melody of  “Girl In My Dreams”  was my initial favorite.  However, the second time through I decided “Ghost Now” , an upbeat tune about defiantly moving forward after a bad ending was the strongest tune. It features a strong melody and a fuzzy guitar riff sure to get stuck in your head.


I later decided “The More Scarred”, an angst ridden song about the wisdom gathered from failed relationships, was the most powerful track.  After yet another listen I was attracted to “The Shit” , a song which has both an old country style and a slight Spanish flare to it, almost like Johnny Cash with Latin guitar.  This may be the most intriguing track on the album.


Still, as of this draft, I think my favorite is “Don’t Bring Me Back”.  This folksy song about nostalgia for the happier times, struck me as being both sad and triumphant at the same time, with clear punchy solos and a powerful melody.  The album closes with “It’s True”, another bluesy tune about a relationship gone astray, featuring Puleo full of soul as he tackles this most true blue of topics.

If you are interested in hearing the spirit of St. Louis music crammed into six songs, then De Los Muertos is the band for you.  And if you happen to be in the St. Louis area later this week, you can be the first on your block to pick up “Altars & Offerings” by attending the De Los Muertos CD release show Saturday, April 23, 2016, 7pm at Foam.