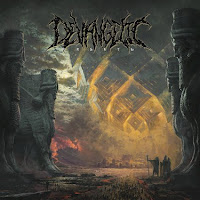 In these scary times, it's important to remember that death metal is a cure all. (NOTE: This is not medical advice meant to cure, diagnose, or treat any disease or virus.)

I put this one on thinking it would be a nice meat and potatoes album of Brutal Death Metal. That's what Devangelic dropped on my head last time.

They are still every bit of a thunder and lightning band, but this record is much better than the last go round we had together.

There are touches here that didn't seem to exist last time, or they weren't pushed up far enough to really register into my psyche. Better solos, more melodic guitars. When a good band gets better, there's nothing more to ask for. 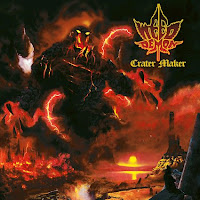 Stoner music is one of those things that takes me back to another place and time. An alternate timeline if you will.

Ohio's Weed Demon...they play this thick, sludged out fuzz stuff that just seems to go on forever. There's no layer of psychedelia attached to this...

It's like Black Sabbath if they never discovered cocaine or LSD.

But then, all of a sudden, it's almost as if it wears off, they go into funeral doom a la Ahab or Mournful Congregation.

This is a great record. It's droning enough to lull the listener into a trance and then it it corrects just enough to be uncomfortable. 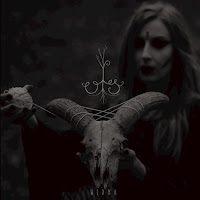 And no for something completely different, or is it?

Glacially Musical is primarily a blog where underground metal is the king, but let's take a break.

Neo Pagan Folk artist, OLS, has delivered an album to me that's worth hearing. You have to do more than listen. We need to hear this album.

Widma is the result of a one woman act. Anna Maria Oskierko is the only visionary and musician on the record.

Her songs are beautiful. They appear to have been written for the very moment in time that I'm going through right now. 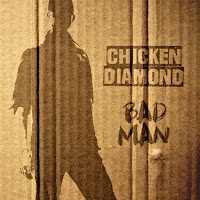 This review is a bit different for me. But I just don't really want to deprive you of this record. Chicken Diamond is a French Punk Blues fella. His music came my way because of my writing on another Punk Blues artist, James leg.

The last album of his I heard was all they way back in 2016, or the before time as it shall forever be known.

Well, what's happened during that time? Diamond has gotten a bit rougher, perhaps he's smoking more, but he's also got a better sense of groove. Bad Man is a great leap forward from it's predecessor, The Night Has A Thousand Eyes.

Where in the past, his music was slightly reminiscent of Leg, he's working his way into being in the same weight class.

Which from me, is high praise indeed. This record surpasses his previous work in every conceivable way.